Jessie Sponberg is Running for Mayor! (Of Portland. Oregon) 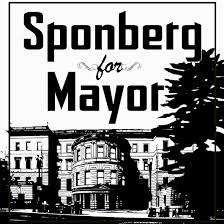 In his own words:

“Development,” used in the context of geography and culture, is a code word neo-colonists use instead of exploitation. When a “developing country” is forced to take a high interest loan from the World Bank, these loans rarely translate into actual quality of life improvements for the poorest demographic. More often than not, the poor see very little and middle class families are burdened with repayment of these loans through taxes. What good are roads and highways to a person with no car?

The scheme is perpetuated when the loans come with caveats that insist these countries spend their funds with American corporations. So essentially, most of that money goes right back into American hands. My problem with this lies in the false paradigm sold to the leaders of these countries. While basic resources like water and shelter are needed, a windshield full of wishes for the possessions of the next man often materializes as a rear-view mirror full of regret and despair.

For just as the grass is always greener, a mentality of ‘comparison poverty’ lies in the eye of the beholder. Who is richer: a man with many appliances who lives in a concrete prison of his own choosing, or a third world economy citizen who knows treasures of the eyes and soul?

Who is rich or richer seems the wrong question, but racism is a given.

So, we can continue along our chosen path of exporting carnage, destruction, terror, munitions and war… and then have mainstream media pretend there are not coffins and consequences in the pursuit of development.

Citizens of underdeveloped countries are encouraged to embrace the belief that ‘quality of life’ is measured by accumulation of material possessions. This has been the modus operandi for colonialists throughout the history of time. In pursuit of shiny objects many an indigenous population has suffered from exploitation, cultural destruction and death.If there was one thing I would offer to these underdeveloped countries in the form of aid, it would be “white man repellent”.

Jessie Sponberg, in his own words…

In Regards To My Candidacy
by Jessie Sponberg
“I have announced my candidacy for the Mayoral Office of Portland, Oregon. As a Portland native who has spent 10 years of my life pursuing social justice through grassroots activism, I have demonstrated beyond politics — but also with my physical body — that I stand as an unwavering ally and accomplice for marginalized communities. It is this drive to better the social fabric of Portland that has created the foundations of my approach, as well as my desire to represent the disenfranchised aspects of our population and give a legitimate voice to their ever-growing concerns.”
My 40 Point Package
for Portland: http://ozone2016.com/

9 comments on “Jessie Sponberg is Running for Mayor! (Of Portland. Oregon)”