“The US Central Command (CENTCOM) is active in 20 countries across the Middle Eastern region, and is actively ramping-up military training, counter-terrorism programs, logistical support, and funding to the military in various nations. At this point, the US has some kind of military presence in Afghan 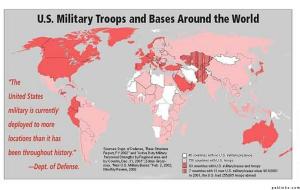 istan, Bahrain, Egypt, Iran, Iraq, Jordan, Kazakhstan, Kuwait, Kyrgyzstan, Lebanon, Oman, Pakistan, Qatar, Saudi Arabia, Syria, Tajikistan, Turkmenistan, U.A.E., Uzbekistan, Yemen and other nations. The U. S. military or the CIA are in active wars or conflicts in 27 nations.  On Obama’s watch we have bombed 10 nations who did not attack us.  We have become the terror.

US Africa Command (AFRICOM), according to the paper,
“supports military-to-military relationships with 54 African nations.”

[Gosztola points out that the U.S. military is also conducting operations of one kind or another in Syrian, Jordan, South Sudan, Kosovo, Libya, Yemen, the Congo, Uganda, Mali, Niger and other countries.]

Altogether, that makes 74 nations where the US is fighting or “helping” some force in some proxy struggle that has been deemed beneficial by the nation’s masters of war.”

“Last year, Karen DeYoung and Greg Jaffe of the Washington Post reported that U.S. Special Operations forces were deployed in 75 countries, up from 60 at the end of the Bush presidency. By the
end of this year, U.S. Special Operations Command spokesman Colonel Tim Nye told me, that number will likely reach 120. “
http://www.salon.com/2011/08/04/secert_american_wars/

~And as for OVERT military action vs covert deployment of special Ops troops:

… This much is inarguable.

When Obama took office we were at war in four nations.

Most of these extra-constitutional wars are violations of US Law,
International Law and abrogate US Treaties.

I do not see this as progress or as progressive.  I see this as a dangerous surrender to the munitions and Fortune 500 corporations permitted to misuse our troops in adventurism abroad. This president is a war-criminal based on his violations of the War Powers Act, Constitutional mandates and continuing illegal drone attacks. And his willing acceptance of abandoning children at our borders, murdering prisoners and funding Isrraeli atrocities in GAZA is unacceptable.

Obama is not stupid. This makes him a tool, corrupt, incompetent or powerless. None of these sound good. (And he may simply be afraid for his own survival.)

Here are some of Obama’s comments during this economic crisis:

“”Any U.S. military action in foreign lands risks creating more enemies and impacts public opinion overseas. Moreover, our laws constrain the power of the President even during wartime, and I have taken an oath to defend the Constitution of the United States. The very precision of drone strikes and the necessary secrecy often involved in such actions can end up shielding our government from the public scrutiny that a troop deployment invites. It can also lead a President and his team to view drone strikes as a cure-all for terrorism.”

~ When Obama is too candid, he scares me a bit.  And his record is not good. He sold us out on health care, |peace, economic reform, capital punishment, wars of choice, civil rights and constitutional mandates against wiretapping, torture, rape, and murder.

And this betrayal was “accomplished” while surrendering our economic base to corporate wars of aggression, misusing troops abroad. This surrender has cost thousands of lives, trillions of dollars in resources, and only reaps
rewards for our sponsors.  (Now in 27 nations instead of 4.)

I’m not certain a Nobel Peace prize has ever before been recalled,
but a growing number of public conversations need be heard.

How many secret wars are we fighting?
This global presence — in about 60 percent of the world’s nations and far larger than previously acknowledged — provides striking new evidence of a rising clandestine Pentagon power elite waging a secret war in all corners of the world.  http://www.salon.com/2011/08/04/secert_american_wars/

The Rise of the Military’s Secret Military
U.S. special ops forces are being deployed in more and more nations
— and the public has no idea…
https://thewordsmithcollection.wordpress.com/2013/11/29/corporate-misadventures-abroad-economic-crunch-at-home/

We can build a future with Dr. Jill Stein, peace and The Green New Deal”