Speaking Truth to Power Since 1981 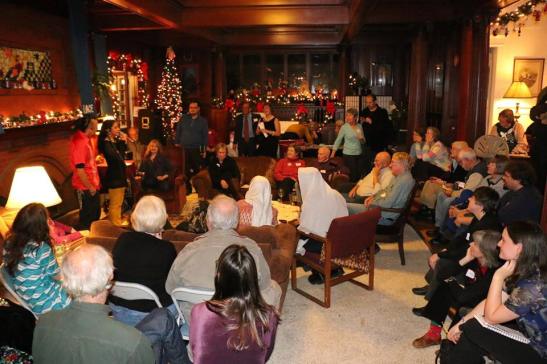 Scrooge of the Year

is an annual award the community (you!) vote on to

It can be a corporation, a politician, or someone

completely different.  We here at Portland Jobs with

for this award is true to our American democratic

system. That’s right – this election is for sale! You

may purchase as many votes as you wish to decide

the worst boss in town.

Come along for the usual mix of entertaining skits,

food, drink, celebration, and of course the crowning

Demonstrators took to the streets of Portland, before entering Lloyd Center mall on Black Friday in an effort to, what protest organizer Teressa Raiford said to call attention to the link between consumerism, capitalism and the deaths of Black Americans.
Photo by Daniel Vincent checkout the whole
story at http://www.theportlandalliance.org/skanner

Checkout the newest information on challenging the TPP!                http://www.ThePortlandAlliance.org/tpp

The TPP, TTIP, & TiSA are much bigger than trade–only 5 of the 29 TPP chapters even deal with trade. They are corporate power grabs that impact every aspect of our lives. If passed, they would take away environmental protections, offshore American jobs & decrease wages, remove food safety laws, curtail internet freedom, inhibit access to lifesaving medicine, spur further financial deregulation and more.

The TPP impacts people of color, the poor, and oppressed communities most. The TPP, and other secret treaties under negotiation, would expand US empire, white-supremacy, and corporate capitalism. These treaties would further privatize schools and prisons, allowing the ruling class to profit from the destruction of black and brown communities. They would increase human and sex trafficking, forced migration, and the ongoing genocide of indigenous peoples. All of this would be upheld by more repressive policing and military intervention as we are already seeing throughout the TPP zone in the United States, Latin America, and East Asia.

Let’s unite all of our struggles for a new world.

City officials in a dilemma.”

What would your reaction be to the above headline if it appeared in your local newspaper? Would you be confused or elated? Would you want to read the details more thoroughly? “Criminal conspiracy?” Those words sound serious. What may be going on here?

“My new book Angels with Dirty Faces Book isn’t officially out
until February, but the first review is out!

It’s in Kirkus Reviews and they liked it, calling it “a brave, honest search for answers regarding incarceration.”
So amazing, this project I have been working on for over a decade of my life, is almost here.  Thanks to AK Press and Institute for Anarchist Studies for making that happen!
ANGELS WITH DIRTY FACES by Walidah Imarisha | Kirkus Reviews

An impassioned look inside the lives of a few inmates, “flawed, damaged, and culpable, but still human.”