Corporations Pay No Taxes & Steal ours

Most of the largest corporations pay little or nothing in federal and state taxes and they steal taxes that everyday people do pay.

https://youtu.be/Ai3YggXpJos?list=RDAi3YggXpJos
“In 2013, the portion of state and local tax collections that were comprised of corporate income taxes varied from a high of 10% in New Hampshire—to a median of 3.2% in Utah—to a low of 0% in Nevada, Texas, Washington and Wyoming.[179]”
https://thepeaceresource.com/2017/12/20/taxes/
.  Large corporations do not pay sales taxes, property taxes, payroll taxes, Social

Security or Unemployment. Everyday working people and consumers pay all of these taxes.  Everyday people in America pay the taxes, while large corporations steal the taxes we pay

Since the recession, this dropped to 10% –even though their profits have doubled in less than ten years. Now they pay 8% or less.

Pay Up Now used SEC data as reported by the companies to determine corporate tax payments over the past five years.

These 64 corporate teams, all top earners, paid just over 8% in taxes over the five-year period.

Here are Sixteen of them:  General Electric:  $81 billion in profits, paid no taxes and received $3 billion of the funds everyday people paid in taxes. 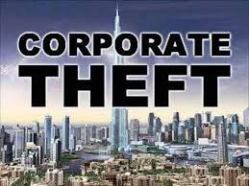 Boeing, in addition to receiving a “refund” despite $21.5 billion in profits, the company ranked high in job cutting, underfunded pensions, and contractor misconduct.

Exxon Mobil made the largest profits in the group, but paid less than 1% in U.S. taxes, and still received oil subsidies along with their tax breaks. The company was also near the top in contractor misconduct.

Verizon had the second worst tax record, getting a “refund” from the taxes we paid,
despite $48 billion in profits.

Kraft Foods received a “refund” from the public and paid no taxes on $13.5 billion in profits. Also a leading job-cutter. 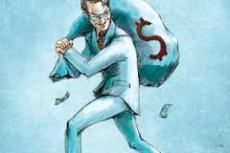 Citigroup is one of the five big banks who got a bailout/”refund” from the American public amounting to three cents from every tax dollar whilel they and paid absolutely no taxes.

Dow Chemical received a “refund” and paid no taxes on $10 billion in profits.

IBM paid less than 3% in taxes while ranking as one of the leading job cutters,
and near the top in contractor misconduct. 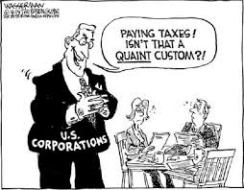 Chevron, in addition to a meager 4.3% tax rate, received a share of “oil subsidies” from the taxes everyday working Americans paid. The company has been the main beneficiary of tax-exempt government bonds.

FedEx paid less than 5% in federal taxes while relying on the Post Office to deliver thirty percent of its ground packages.

Honeywell paid less than 6% in taxes, was a leading job cutter, near the top in instances of contractor misconduct and run by the “Fix the Debt” CEO with the largest pension fund.

Pfizer was one of the leaders in stockpiling untaxed profits overseas, and right behind Merck in contractor misconduct dollars.

Google is a master at the “Double Irish” revenue shift to Bermuda tax havens, while using tax loopholes to bring a lot of the money back to the U.S. without paying taxes on it. This firm is recognized as one of the world’s biggest tax avoiders.

Microsoft is named as one of the biggest offshore hoarders while using tax strategies to bring much of their untaxed money back to the U.S., where it also avoids state taxes.

All these companies, after using our infrastructure, technology, research facilities, higher-education and national defense to build incomparably successful businesses… are now doing everything in their power to avoid paying anything back.

Instead they are using a carefully manipulated set of “legal” business write-offs, exemptions and loopholes to cut their tax bills to almost nothing.

And they continue to claim the U.S. tax code is unfair to them!

Human beings are suffering because of the tax games these corporations play.

Paul Buchheit teaches economic inequality at DePaul University. He is the founder and developer of UsAgainstGreed.org, PayUpNow.org, RappingHistory.org,and the editor and main author of “American Wars: Illusions and Realities” (Clarity Press).  He can be reached at paul@UsAgainstGreed.org.