The battle to ‪#‎StopFastTrack‬ will be won or lost in the House of Reps. With a newly elected Congress the votes are uncertain. Reps committed to voting NO on Fast Track report being pressured several times a day to change their vote.

Click Pic or “See More” for ACTIONS You Can Take!

Fast Track legislation expected to be introduced the week of February 23.

The battle to ‪#‎StopFastTrack‬
will be won or lost in the House
of Representatives.  With a newly
elected Congress the votes
are uncertain. Representatives
committed to voting NO on Fast
Track report they are being
pressured several times a day to
change their vote.
_________________

Easy Steps to Schedule a Face to Face
Meeting: http://tinyurl.com/How2DoFace2Face

– Stand on a street corner & pass out fliers: http://tinyurl.com/FlierTPP

“I’ve had enough of bad trade deals
like the Trans-Pacific Partnership
[TPP] that trade U.S. jobs to the
lowest bidder and increase the
power of multinational corporations
and Wall Street over our democracy.
I urge you to stand up to this corporate
power grab and vote no on fast track
authority for the Trans-Pacific
Partnership.”
— Larry Cohen, CWA President

“Now corporate lobbyists want
Congress to help speed things
along by authorizing Trade
Promotion Authority,
a special set of ‘fast track’
rules for the deal so that
it can be pushed through
without allowing time for
close review, debate or

amendments, and guaranteeing
a quick vote in both the House and Senate.”

|Fast Track is the legislative mechanism used to ram bad legislation,
like the TPP, down our collective throats. Such legislation would not
otherwise pass congressional or public scrutiny.
Fast Track was used to pass NAFTA and the WTO.
____________
More Info on TPP & Fast Track at Expose the TPP – USA 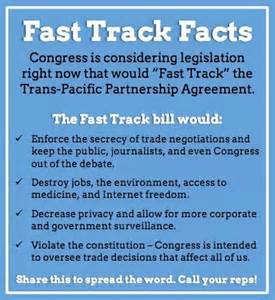