This Morning, Racists Burned a 7th Black Church Near Ferguson

Seven predominantly-black churches in North St. Louis, Missouri, which is near Ferguson, have been targeted by one or possibly more arsonists in the past 11 days. St. Louis and the surrounding region have been home to a resurgence of new-era Civil Rights organizing in the wake of the 2014 killing of Mike Brown by Ferguson police. The Ferguson uprising is credited with launching the nationwide #BlackLivesMatter movement.

This recent string of arsons is the second wave of black church burnings this year. The first occurred this past summer, after arsonists targeted at least six black churches in the wake of the massacre by a young white supremacist at the historic Emanuel AME Church in Charleston, South Carolina.

“You can burn down the building, but you cannot break our body,” said the Rev. David Triggs, pastor at New Life Missionary Baptist Church, one of the seven churches targeted. 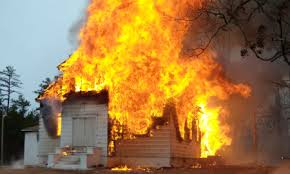 Arson against black churches has a long history in America, related to the central role these churches have traditionally played in black communities. Dating back to the decades before the Civil War, the black church has been both a place of worship and a site of resistance to violent oppression. From 19th-century movements to end slavery, to 20th-century opposition to Jim Crow segregation, to present day struggles like #BlackLivesMatter, the black church has been key to the long and ongoing fight for civil rights and equality for all Americans.

Though officials have yet to finish investigating and assessing the specific motivations behind these most recent incidents, historically this kind of violence against black churches is typically intended to disrupt the support networks these churches provide, to incite interracial conflict, and to intimidate black communities that have begun to successfully challenge systemic, violent oppression.

Despite raising the specter of domestic terrorism enacted by far-right and white supremacist extremists — which has been rated by some in law enforcement as the number one terror threat facing the country — both strings of arsons have received relatively little attention from the mainstream news media.

Sabrina Joy Stevens is a writer living in the DC area. She specializes in issues related to education, civil rights, economic justice and reproductive justice. Follow her on Twitter: @TeacherSabrina

Law enforcement officials are still investigating a spate of “very disturbing” church fires in north St Louis, as a seventh church was targeted early on Thursday.

The seventh church, Shrine of St Joseph, was set afire around 1.35am at the exterior door of the rectory, police said. The church was unoccupied at the time and no injuries were reported.

St Louis fire chief Dennis Jenkerson said the incident was “very similar” to the other six church fires, which have taken place over the last two weeks.

“It didn’t take much to put [the St Joseph fire] out, but it’s very disturbing,” Jenkerson told reporters early on Thursday.

While the majority of the churches affected by the recent rash of alleged arsons are predominantly black, the St Joseph congregation is primarily white, according to a former head of the church’s board, Ralph Kannady. The churches are within a few miles of each other, near Ferguson, Missouri.

“I think it stinks,” Kannady told the St Louis Post Dispatch. “I can’t understand why anyone would want to set fire to a church door. This world is full of nuts.”

The first six fires have been classified as arsons, although no suspects have been identified.

Michele Brown, office manager and long-time parishioner of St Augustine Catholic church, struck by a fire on 14 October, said the initial reaction of the congregation was stunned surprise.

“We were sort of shocked,” she said. “And this was compounded by the fact that a number of churches in the area have been affected.”

Brown called the fact that the majority African American churches are clustered in an area near Ferguson “a disturbing pattern”.

The Wordsmith Collection:
Writing & Creative Arts
http://writingresource.blogspot.com/p/please-donate-to-keep-these-resources.html
Please Donate for Literacy and to keep this resource.  We appreciate it. 😉

2 comments on “This Morning, Racists Burned a 7th Black Church Near Ferguson”