There is no such thing as an “Illegal Alien.”

“Give me your tired, your poor, 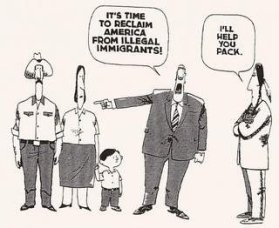 Your huddled masses yearning to breathe free,
The wretched refuse of your teeming shore.
Send these, the homeless, tempest-tossed, to me:
I lift my lamp beside the golden door.”

― “quote on the Statue of Liberty”

When we installed this beacon of freedom at our doorstep,
this was revolutionary.

http://immigrationwithjustice.blogspot.com/2010/04/we-have-seen-enemy-and-he-is-us.html
“After years and years of video loops running on the cable television networks, for many Americans the term “illegal alien” conjures up images of people illegally jumping over the Southern border. Most people would be surprised to learn that nearly half the undocumented population entered the U.S. legally. Some came as visitors, others as students, and others as temporary workers. Some fell out of status because they took ill and were forced to drop out of school, others because they fell victim to domestic violence or other crimes, and others because their sponsoring employer mistreated them.

Even those foreign nationals that entered the country surreptitiously in direct violation of the immigration law are not “illegal”. Some, like victims of human trafficking, are eligible for protection, not prosecution, under our immigration law.” 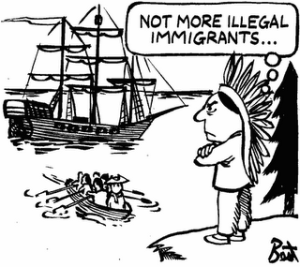 There Is No Such Thing As An ‘Illegal Alien’
“Yes, you read it correctly. There really is no such thing.
And not because the Associated Press announced a long
overdue change to its Stylebook yesterday.”

~We should build bridges instead of fences. Our nation was built by immigrants. Every time we have limited immigration, we have suffered because of it.  We should live up to what it says on the statue of liberty.
Closing our doors to those who seek freedom is wrong.
http://theissueslist.blogspot.com/2013/05/do-right-thing.html