Secretary of State Hillary Clinton shared a laugh with a television news reporter moments after hearing deposed Libyan leader Muammar Qaddafi had been killed.  “We came, we saw, he died,” she joked when told of news reports of

Qaddafi’s death by an aide in between formal interviews.  The reporter asked if Qaddafi’s death had anything to do with her surprise visit to show support for the Libyan people.  “No,” she replied, before rolling her eyes and saying “I’m sure it did” with a chuckle.
https://youtu.be/6DXDU48RHLU

Clinton Falsely Claimed That She Landed Under Sniper Fire in Bosnia

In the New York Primary Debate, Clinton Misrepresented Her Support for a $15 Federal Minimum Wage

Hillary Falsely Claimed That She Was Always Opposed to NAFTA 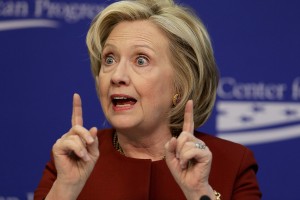 Hillary even lies to herself.

Here are the costs of her errors, lies and mistakes.

Hillary has spent trillions, killing millions for billionaires who support her.

Clinton, along with Samantha Power, the U.S. ambassador to the UN, and Susan Rice, the Obama administration’s national security advisor, has pushed for muscular interventions without thinking — or caring — about the consequences.

Here is video of her lying during a congressional investigation of Benghazi. Flat. Out. Lies.

The lady is not trustworthy.

Hillary thinks the rule of law does not apply to her. She is dangerous. There have been consequences as a result of her lies and mismanagement as Secretary of State. And those consequences have been dire.

Afghanistan: Somewhere around 220,000 Afghans have died since the 2001 U.S. invasion, and millions of others are refugees. The U.S. and its allies have suffered close to 2,500 dead and more than 20,000 wounded, and the war is far from over. The cost to the treasury alone runs close to $700 billion, not counting long-term medical bill that could run as high as $2 trillion.

Libya: Some 30,000 people died and another 50,000 were wounded in the intervention and civil war. Hundreds of thousands have been turned into refugees. The cost to Washington was cheap at a cool $1.1 billion, but the war and subsequent instability created a tsunami of weapons and refugees — and the fighting continues. It also produced one of Clinton’s more tasteless remarks. Referring to Gaddafi, she said, “We came, we saw, he died.” The Libyan leader was executed by having a bayonet rammed up his rectum.

Ukraine: The death toll now exceeds 8,000, some 18,000 have been wounded, and several cities in the eastern part of the country have been heavily damaged. The fighting has tapered off, although tensions remain high.

Yemen: Over 6,000 Yemenis have been killed and another 27,000 wounded. According to the UN, most of them are civilians. Ten million Yeminis don’t have enough to eat, and 13 million have no access to clean water. Yemen is highly dependent on imported food, but a U.S.-Saudi blockade has choked off most imports. The war is ongoing.

Iraq: Anywhere from 400,000 to over 1 million people have died from war-related causes since the 2003 invasion. Over 2 million have fled the country and another 2 million are internally displaced. The cost: close to $1 trillion, but it may rise to $4 trillion once all the long-term medical costs are added in. The war grinds on its latest incarnation: a bloody turf war with the Islamic State, which emerged from the Sunni insurgency against the U.S.-installed government.

Syria: Over 250,000 have died in the war, and half the country’s population has been displaced — including four million Syrian refugees abroad. The country’s major cities have been ravaged. The war, like the others, is ongoing. (Note: The Syrian Conflict involves CIA mercenaries fighting against U. S. Pentagon mercenaries. In this conflict, we sponsor and sell arms to both sides of the conflict so Syrians can destroy their own nation and murder each other.  https://thewordsmithcollection.wordpress.com/2016/03/01/cia-rebels-fighting-pentagon-rebels/  )

There are other countries — like Somalia — that one could add to the butcher bill. Then there are the countries that reaped the fallout from the collapse of Libya. Weapons looted after the fall of Gaddafi largely fuel the wars in Mali, Niger, and the Central African Republic.

These wars for profit are destroying America. Spending trillions to kill millions for billionaires creates new enemies, makes us less safe and will bankrupt the nation. We cannot afford eight more years of lies and wars for profit.

And we have better a much better option.