https://youtu.be/fvJ0l_Lfb5s
A Cure for the Blues by Mark Twain (Short-Story)

“Florida is a currently uninhabited village in Monroe County, Missouri, United States. It is located at the intersection of Missouri Route 107 and State Route U on the shores of Mark Twain Lake. The population was 200, per the census data in the 1911 Cram’s World Atlas. The population was however down to nine residents according to the 2000 United States Census, and following the 2010 Census, the village was reported as uninhabited. The Mark Twain Birthplace State Historic Site is located in Florida, with Mark Twain State Park nearby. (en)”

It is understandable why Clemens left Florida. And intriguing that Burroughs ended up in Kansas…

As a pool player born in St. Louis, I find both authors a bit odd, yet interesting in their own ways…

“When Clemens was four, his family moved to Hannibal, Missouri, a port town on the Mississippi River which later served as the inspiration for the fictional town of St. Petersburg in The Adventures of Tom Sawyer and Adventures of Huckleberry Finn. Missouri had been admitted as a slave state in 1821 as part of the Missouri Compromise, and from an early age he was exposed to the institution of slavery, a theme which Twain was to later explore in his work. The family was poor and Sam’s father failed repeatedly in his business attempts. In 1847, when young Sam was eleven, his father fell ill with pneumonia and died. ”

“…Beset by illness and heart trouble (angina pectoris), he sought refuge in travel, as he had often done in the past, and spent some of his final days in Bermuda.

Samuel L. Clemens—”Mark Twain”—returned from Bermuda to his Connecticut home, “Safe Waters” at last, where he died on April 21, 1910. 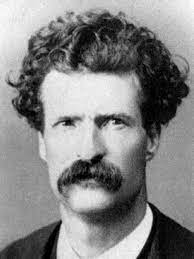 Some of Twain’s writings, suppressed during his lifetime because of their controversial tone and the objections of his family members, were published posthumously. His collection of short stories, Letters from the Earth, wasn’t published until 1962. Twain did not attempt to publish his book, What is Man? until after his wife Livy died. Both of these books, and other later works, express his iconoclastic views and growing despair towards both God and man.”

“Upon his death in 1997 at the age of eighty-three, Burroughs was eulogized as everything from the “most dangerous” of Beat writers to the undisputed patriarch of this important movement in twentieth century American writing. Although Burroughs’s lifelong penchant for the cutting edge of fiction continues to intimidate some scholars and critics, none can dispute his role as a significant innovator and catalyst for change in twentieth century fiction and popular culture.”

“To get the right word in the right place is a rare achievement. To condense the diffused light of a page of thought into the luminous flash of a single sentence, is worthy to rank as a prize composition just by itself…Anybody can have ideas–the difficulty is to express them without squandering a quire of paper on an idea that ought to be reduced to one glittering paragraph.”

“After a shooting spree, they always want to take the guns away from the people who didn’t do it. I sure as hell wouldn’t want to live in a society where the only people allowed guns are the police and the military.”
~William S. Burroughs

“After one look at this planet any visitor from outer space would say ‘I want to see the manager.’
~ William S. Burroughs

Please Donate to help keep this resource online.  We appreciate your help.