A $15 wage is unreasonable, insufficient and untenable. We can do better. 24-27 dollars an hour pays the rent.

When the minimum wags is below the poverty level, people ARE forced to take low-paying jobs.

(These ARE NOT “entry-level” positions. People receiving minimum wages are more often than not supporting families and barely surviving. These starvation wages have nothing to do with “new-workers.” They are about starving the poor to provide corporate welfare.)

Music in this video  Jeep’s Blues 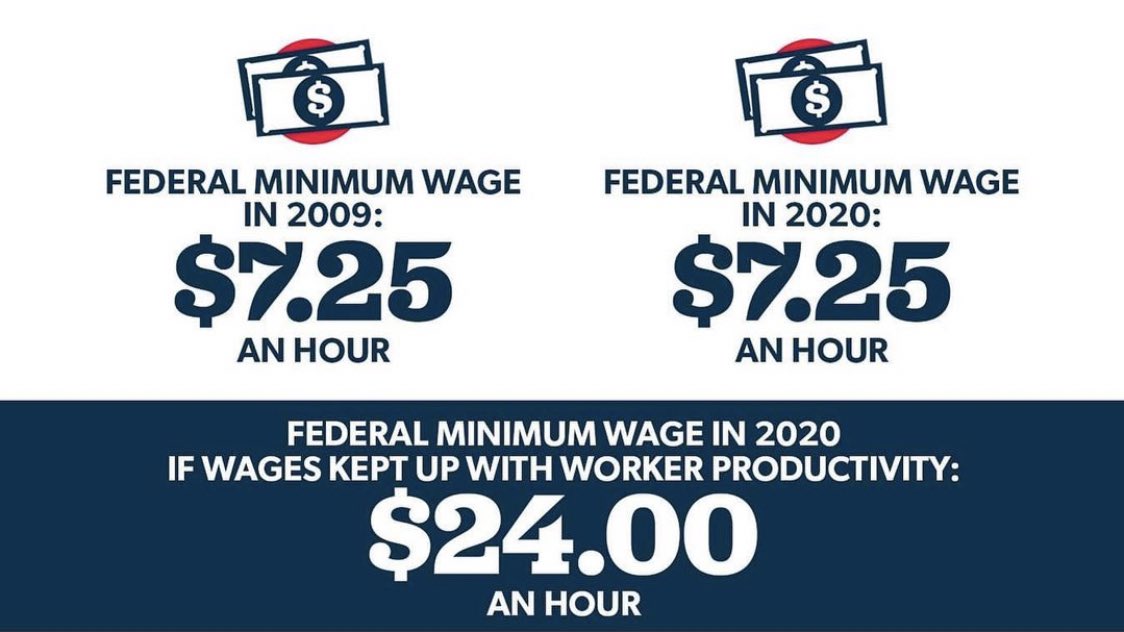 Allowing rich corporations to exploit hard-working people is flat wrong. And the unscrupulous firms who pay starvation wages while giving their CEOs billions of dollars in stock options and benefits… cannot be allowed to continue. This crude exploitation is untenable and has already crippled this nation.

What we need is a minimum wage which delivers what our legislators intended to deliver when such a wage was first enacted.

“On Saturday, June 25, 1938, to avoid pocket vetoes 9 days after Congress had adjourned, President Franklin D. Roosevelt signed 121 bills. Among these bills was a landmark law in the Nation’s social and economic development — Fair Labor Standards Act of 1938 (FLSA).

Against a history of judicial opposition, the depression-born FLSA had survived, not unscathed, more than a year of Congressional altercation. In its final form, the act applied to industries whose combined employment represented only about one-fifth of the labor force. In these industries, it banned oppressive child labor and set the minimum hourly wage at 25 cents, and the maximum workweek at 44 hours. Forty years later, a distinguished news commentator asked incredulously: “My God! 25 cents an hour! Why all the fuss?” President Roosevelt expressed a similar sentiment in a “fireside chat” the night before the signing. He warned: “Do not let any calamity-strike!”  Show me an executive with an income of $1,000 a day, …tell you…that a wage of $11 a week is going to have a disastrous effect on all American industry.” In light of the social legislation of 1978, Americans today may be astonished that a law with such moderate standards could have been thought so revolutionary.”

““If the minimum wage had kept step with productivity gains, as it did from 1938 to 1968, it would now be $24, according to a January 2020 study by the Center for Economic and Policy Research.“

Raising the minimum wage to $15 an hour would inject about $450 billion into the economy each year. That would give more purchasing power to millions of poor and lower-middle-class Americans, and would stimulate buying, production and hiring.

Studies by the Economic Policy Institute show that a $15 minimum wage would directly affect 51 million workers and indirectly benefit an additional 30 million. That’s 81 million people, or about 64 percent of the workforce, and their families who would be more able to buy cars, clothing and food from our nation’s businesses.

This virtuous cycle effect is described in the research of economists David Card and Alan Krueger (the current chairman of the White House Council of Economic Advisers) showing that, contrary to conventional economic orthodoxy, increases in the minimum wage increase employment. In 60 percent of the states that raised the minimum wage during periods of high unemployment, job growth was faster than the national average.

Some business people oppose an increase in the minimum wage as needless government interference in the workings of the market. In fact, a big increase would substantially reduce government intervention and dependency on public assistance programs.”

In short, starving the poor to feed the rich is cruel and must be ended.
When everyday people get a living wage, all ships rise. Or we continue a downward spiral.

Join the Revolution!
Please Donate for Literacy and to keep this resource.