Stein and Baraka call for a halt to the Dakota Access Pipeline construction and say the United States must honor our treaties with Native American Nations. 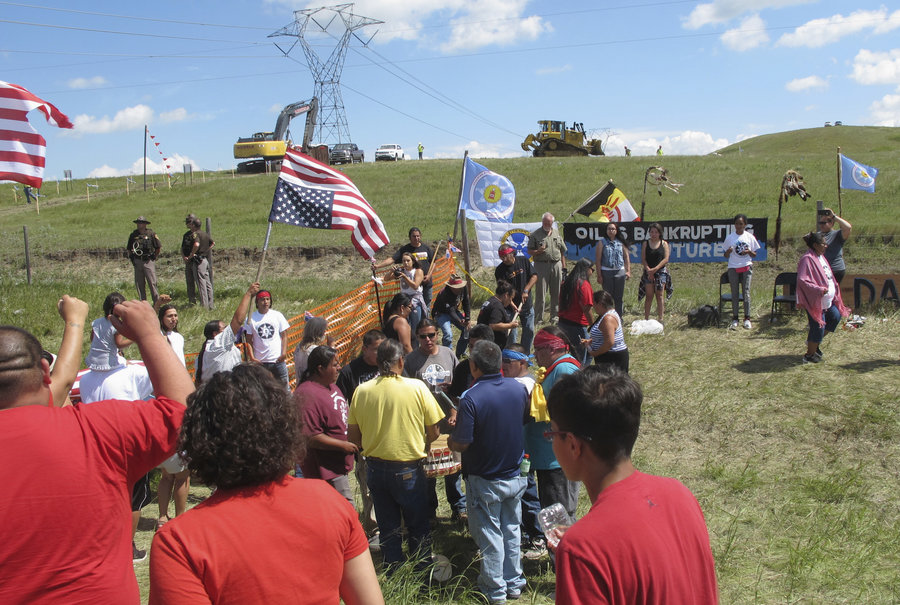 Dr. Jill Stein and Ajamu Baraka, Green Party Presidential and Vice Presidential candidates, joined the call for an immediate halt to construction on the Dakota Access Pipeline, which would violate US treaties by endangering the drinking water and sacred sites of the Standing Rock Sioux tribe.

If constructed as planned, the Dakota Access Pipeline would transport roughly 470,000 barrels of crude oil daily over the Missouri River less than a mile from the Standing Rock Sioux territory. Thousands of peaceful protesters have come to the area to support the Standing Rock Sioux tribe. Authorities and police have been arresting and detaining many of them under trumped up charges and false accusations of violence.

“We salute the courageous people of the Standing Rock Sioux reservation and their allies who are standing up to protect their land and our future on Earth from the poisonous fossil fuel industry and an economy that puts corporate profits over people and planet,” said Stein.

“The time is now to stop the destruction of our planet for short-term profits. Extreme weather exacerbated by climate change shows why we need to immediately say no to fossil fuel expansion, and say yes to wind, water and solar. Transitioning to 100% clean renewable energy, as our Green New Deal program will do, is the path to ending unemployment, halting climate meltdown, and building a healthier society. It provides a just transition that respects the lives, lands, and livelihoods of Native American

commuunities. It’s also the only
way forward to a future in which
we can survive and thrive.”

“We must follow the lead of Indigenous communities that have protected their land for countless generations, and work together and in solidarity to leave a thriving planet for future generations and all living beings,” concluded Baraka.

Hillary Clinton, the infamous war criminal, finally broke her silence the same day that peaceful protesters were beaten and arrested so oil companies can continue to destroy sacred sites and ignore tribal concerns.

“We received a letter today from representatives of the tribes protesting the construction of the Dakota Access Pipeline. From the beginning of this campaign, Secretary Clinton has been clear that she thinks all voices should be heard and all views considered in federal infrastructure projects. Now, all of the parties involved—including the federal government, the pipeline company and contractors, the state of North Dakota, and the tribes—need to find a path forward that serves the broadest public interest. As that happens, it’s important that on the ground in North Dakota, everyone respects demonstrators’ rights to protest peacefully, and workers’ rights to do their jobs safely.”

“Hillary Clinton managed to make a statement about the Dakota Pipeline that literally says nothing. Literally,” 350.org co-founder Bill McKibben tweeted in response.

“Kind of a BS statement by the Clinton camp on #NoDAPL, frankly,” wrote MSNBC host Joy Reid. “The outrage taking place out there cries out for outrage.”

Others noted that the statement “is the most Clinton thing of all times,” as Fairness & Accuracy in Reporting journalist Adam Johnson put it.

In a lengthy Twitter thread, anonymous commentator @ActualFlatticus breaks down what they say is the campaign’s “triangulation” of the protest.

Donald Trump is funding the pipeline and had nothing to say about the beatings and abuses of unarmed Native Americans trying to protect the Missouri River.

Obama, Hillary’s sponsor, has allowed these abuses to continue.

Only one presidential candidate, Jill Stein, stands with the Standing Rock Sioux.

Writing & Creative Arts
http://writingresource.blogspot.com/p/please-donate-to-keep-these-resources.html
Please Donate for Literacy and to keep this resource online.
And Thanks!  You make a difference.

One comment on “Stein Stands with Standing Rock Sioux”