Obama is to the right of George Bush on War, Torture and Civil Rights

“George Bush seized on the 9/11 attack to usher in radical new surveillance and detention powers in the PATRIOT ACT, spied for years on the communications of US citizens without the warrants required by law, and claimed the power to indefinitely imprison even US citizens without charges in military brigs. 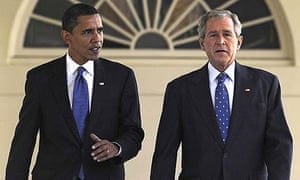 His successor, Barack Obama, went further by claiming the power not merely to detain citizens without judicial review but to assassinate them (about which the New York Times said: “It is extremely rare, if not unprecedented, for an American to be approved for targeted killing”). He has waged an unprecedented war on whistleblowers, dusting off Wilson’s Espionage Act of 1917 to prosecute more then double the number of whistleblowers than all prior presidents combined. And he has draped his actions with at least as much secrecy, if not more so, than any president in US history.
source:
http://www.theguardian.com/commentisfree/2012/nov/02/obama-civil-liberties-history

“… It has become challenging to keep up with all the ways in which the Barack Obama  has not only embraced, but expanded and institutionalized, George W. Bush’s most radical policies.

Two significant shifts have happened during the first months of Obama’s second term. Firstly, the reality of the president’s true policies has finally penetrated mainstream discussion, spurred on by the Guantánamo hunger strikes, revelations about en mass domestic surveillance, prosecution of journalists and whistleblowers, as well as by the growing consciousness about the drone assassinations. Secondly, freed from the pressures of reelection, the White House has become free to move even further to the right…

‘President Obama will go down in history as the president who enshrined indefinite detention without trial in US law.’  …

With an executive order in early 2009, Obama

… explicitly authorized the CIA to continue “extraordinary renditions” to other countries, resulting in torture.

…After expanding his own presidential authority by asserting the right to decide on terrorism suspects’ guilt without any legal process, and to detain individuals on suspicion of possible future crimes (see point 1.3), Obama took the expansion of executive power one step further: In January 2010, the Director of National Intelligence, Adm. Dennis Blair, testified before Congress that the Obama administration is reserving the right to include Americans on the assassination list, and kill them anywhere abroad at any time, without legal oversight. Obama claims the “right of kings” and has murdered U. S. citizens without a trial.

… Obama has surpassed Bush and and Reagan in defense spending, with the largest co

mbined budget for the military since World War II.  …  Obama has hiked the spending on “Special Operations” forces, secretly deployed them to 75 countries, and extended de facto “secret wars” to Somalia and Yemen. Moreover, he started a full-fledged military campaign in Libya.

Among other things, while president, Obama did these things…

5 comments on “Obama is to the right of George Bush on War, Torture and Civil Rights”