The American Federation of Teachers, AFL-CIO, AFSME, and most unions, are predicated on social justice.

Any bureaucracy (political, social, radical or corporate) includes some corruption, greed and ill-will. But when people join together to resist oppression and injustice, precisely what they are seeking is peace, freedom and economic, political and social justice.

“Although it is true that only about 20 percent of American workers are in unions, that 20 percent sets the standards across the board in salaries, benefits and working conditions. If you are making a decent salary in a non-union company, you owe that to the unions. One thing that corporations do not do is give out money out of the goodness of their hearts.”
~Molly Ivins 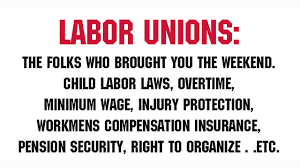 “Every advance in this half-century: Social Security, civil rights, Medicare, aid to education… one after another- came with the support and leadership of American Labor.”
~Jimmy Carter

“Today, although there are still sweatshops and other inhumane working conditions for many workers around the world, the labor movement has won numerous victories that many of us take for granted, such as the 5-day work week, 8-hour work day, paid holidays and the end of child labor.”
~Robert Alan

“The history of America has been largely created by the deeds of its working people and their organizations–there is scarcely an issue that is not influenced by labor’s organized efforts or lack of them.”
~William Cahn, Labor historian

“History is a great teacher. Now everyone knows that the labor movement did not diminish the strength of the nation but enlarged it. By raising the living standards of millions, labor miraculously created a market for industry and lifted the whole nation to undreamed of levels of production. Those who attack labor forget these simple truths, but history remembers them.”